I don't know why I didn't think of this game sooner when I thought of games to review. It probably had something to do with the fact that this is not your typical indie game, or even your typical game, for that matter.

Forgotten Kingdoms is a MUD, or multi-user dungeon. It is, essentially, a wholly text-based online Dungeons and Dragons game, though your typical MUD could be just about any setting. It can be considered a form of MMORPG, but it typically requires a bit more patience than your average MMO. I've played a lot of MUDs, but not so much in previous years. Forgotten Kingdoms has totally spoiled me. I can't play any other MUD. I've tried.

For a brief and amusing example of how MUDs work, fast forward this video to 1:32.

A unique facet of all MUDs is the amount of reading you're required to do. With this MUD in particular, players get a fun combination of hack and slash and roleplay. Forgotten Kingdoms is roleplay enforced, so you are required to absorb yourself in the world and put on the mask of whatever character you create.

The story itself is rooted in the Forgotten Realms (3.5 edition, ignoring 4th ed altogether) campaign setting of Dungeons and Dragons. If your "Realmslore" is lacking, however, the game has a series of useful help files that can bring you up to speed, as well as links. The game also has a player council, so if you're utterly lost you can use the "ask" function to get you right back on track.

Character creation is fun and engaging. You can pick from 4 base classes: warrior, priest, rogue, or wizard, and there are 25 races total to choose from, each with a descriptive help file to help you decide which to play. The basic races are human, dwarf, elf, halfling, half-elf, orc, gnome, and planetouched, with each (except humans) having a number of sub-races available. Each race has its own benefits, and as such, some races are restricted to new players until they get used to the game ad have learned the ins and outs.

You also get to choose your character's alignment from a list of 9 standard ones. It's important to act your alignment, as certain NPCs react to you depending on it.

My personal favourite part of the game is the faith system. Your character can follow one of 33 coded Forgotten Realms deities, or can apply to follow one of the many uncoded deities that exist within the Forgotten Realms setting. Following a coded deity has a number of benefits, from coded supplication items to domain prayers for clerics, not to mention the roleplay that comes from following a god in character. When a character follows a god, she is, essentially, given an in-character family, plus, probably, a group of enemies. For example, followers of Selune will not suffer followers of Shar, and vice versa. While uncoded deities provide little actual coded benefit, they do provide unique roleplay that might not be seen otherwise.

There are numerous areas, built by players and administrators alike, to expand on the world, and they're always looking for more people to contribute.

It's hard to put this game into words, other than by playing it. It is, admittedly, not for everyone; if you hate typing and reading, then I'm afraid you're out of luck. If you are looking to enter an immersive roleplay enforced experience and don't mind giving the Forgotten Realms setting a try, then give this MUD a go. It may surprise you with how much you enjoy it.

Briefly, I'll talk about the game's creators. This game is unique in that, because of the nature of the code, anyone can contribute to it, whether it's by helping with code testing or building areas for players to adventure in. Currently the game's version is 4.1, having been expanded from 1990's original DikuMUD code by Martin Gallwey and a number of others. Martin Gallwey is the most noteworthy, as he has been the game's main coder from the beginning and remains so today.

I have included a little screenshot here for your benefit, to show what the game looks like. Don't be daunted--you grow accustomed to the amount of text really quickly, and the character creation process eases you nicely into it. 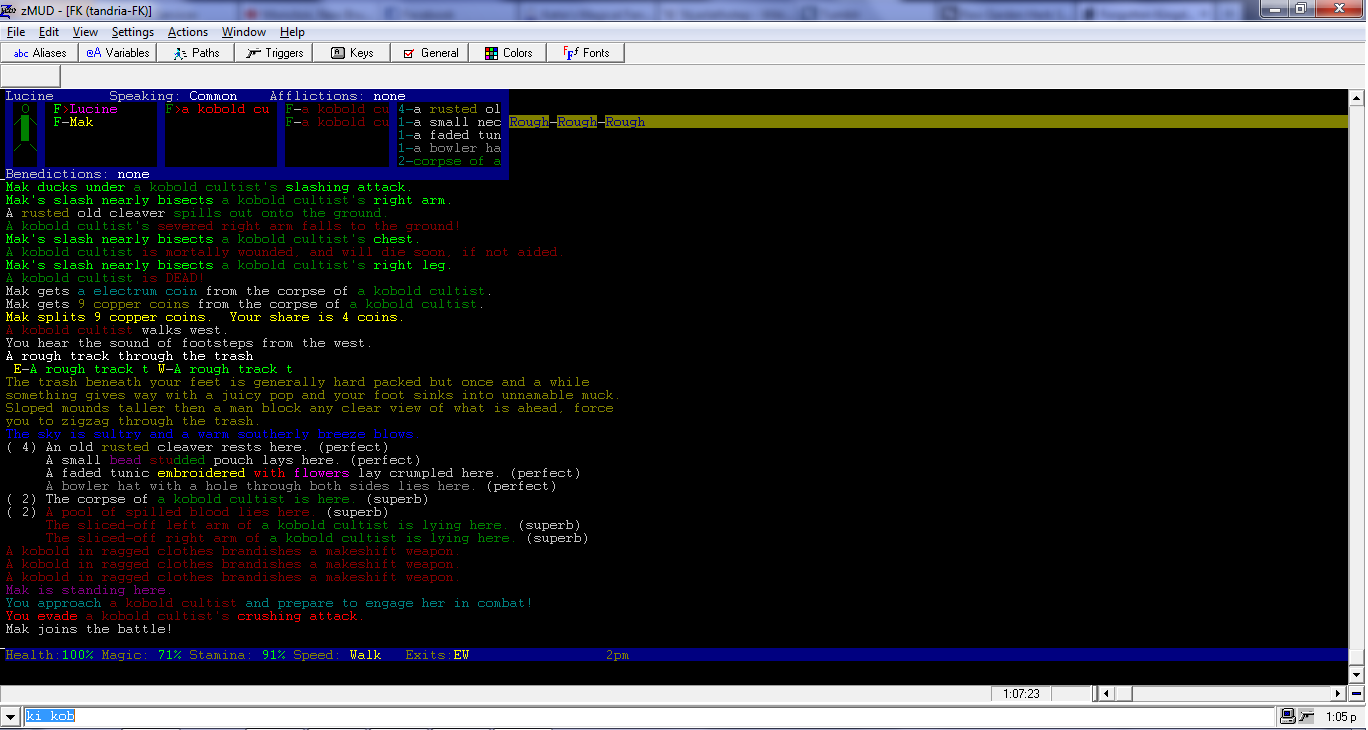 Hope to see you in Waterdeep sometime.

-K8-bit, otherwise occasionally known as Tandria, Jezebel, Kelykii, Lucine, and a plethora of other characters
at 2:20 PM 4 comments: