Small note: This game was generously gifted to me by my friend Melissa. Thanks so much for sharing this game with me, Melissa, and for making this review possible! 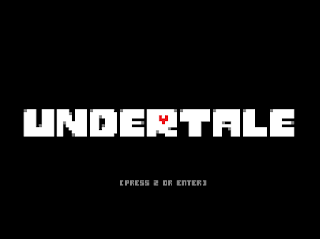 The moment I saw snippets of a Let's Play of Undertale, I knew I'd have to play it.  I had a feeling this was a game I'd want to experience fully. Absolutely nothing would prepare me for what was to come.

At its surface, Undertale looks like an unassuming, quirky, old-school RPG with heaps of charm, humour, and personality.  The battle system is unique, boasting the typical attack/flee/item formula of most RPGs, but with some new features: ACT and MERCY. ACT allows you to take specific actions with the enemies, and MERCY allows you to either flee or spare the enemy. Undertale, you see, doesn't require you to kill or even battle its monsters. You can complete the game without landing a single attack on an enemy. Also, the player is forced to dodge attacks in a bullet hell-style minigame. The enemy will fire attacks of various kinds and you will have to dodge them with a small red heart, which represents your player character. The game is also rife with fun little puzzles. None of the puzzles are too terribly difficult, especially after playing through the game once. Boss battles are satisfying, regardless of outcome, and reasonably dramatic. 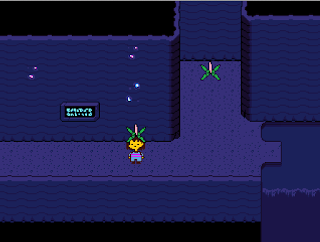 The music, which is always a high selling point for me, is practically perfect--it's genius, really. It's self-referential--you'll notice the same leitmotifs popping up here and there with remixes and other melodies threaded with new ones. Each song fits its context perfectly. There is a lot of chiptune music that is backed by strings or other instruments, hearkening to the game's classic feel with a new twist. The soundtrack also features touching piano melodies, goofy themes for bumbling characters, the occasional disturbing low-frequency tune, and a few sweeping epics. I recommend listening to the soundtrack in the context of the game before listening to it solo.

It's difficult to talk about aspects of the storyline without spoiling anything, so I will omit that entirely and say that you simply need to play this game for yourself--Undertale needs to be experienced to be understood, and deserves the attention it requests. The game can be beaten from start to finish in about 5-7 hours, but I recommend playing through twice--10-14 hours altogether.

This game is very complex, and nothing is quite what it seems. There is an unsettling quality to the game that's hard to describe. I'm not sure if it's in the retro-styled graphics, the music, or something else, but there always seems to be something bubbling under the surface, even amid the lighthearted moments. The game itself is humorous; it never takes itself too seriously, all the while subverting and poking fun at typical gaming conventions. The fourth wall is frequently broken. 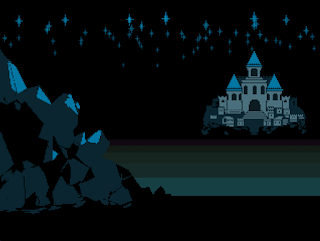 If you enjoy this game, you will certainly play it twice, and you'll enjoy going back to see the hints of foreshadowing, as well as Easter eggs. If the game interests you, I urge you: stop at this article, and don't read anything else until you've played it through at least twice. This game has a ton of layers. In some ways, it reminds me a little bit of Journey--ways that aren't evident if you haven't played.

I loved this game and I don't think I'm finished with it yet. It was an expertly crafted experience--fun, quirky, and just the right amount of heaviness. I can't stop thinking about it.  I honestly believe that every game developer, whether indie or AAA, can take notes from Undertale. The fact that this game was Kickstarter-funded and received over ten times the requested amount is a testament to the excellence that was produced here. It is transcendent of video games and offers a story that cannot be told through any other medium. My only regret about the game is that I didn't hear about it when the funding was underway.

This is another very brief post to give a shout-out to my friend and fellow indie games blogger, Chad, who runs Fring Frang. Chad is going to be doing a Twitch stream of Atlantic Canada: The RPG, and will be speaking with the game's creator, Don Levandier. The stream takes place this coming Thursday evening at 7 PM Atlantic time.

Check out the Facebook event to be reminded, and I hope you'll join me in watching! My Twitch username is apillini, so feel free to send me an invite, as well. I don't do any streaming yet, but I hope to do so at some point in the future!

I'm slowly trying to re-introduce myself to writing for this blog, as I really love the indie games community and want to draw attention to new and interesting games when I can. I have also been hard at work with one of my own. Please keep an eye open for more posts soon.
at 6:56 PM No comments: