I have a very special Halloween review for you today. This game has been released through Kongregate in recent instalments. I'm anxiously awaiting the third, which is available on their website as a pay-to-unlock, as is the fourth. Chapters one and two, plus the prologue, are all available on Kongregate.

The Last Door is a Kickstarter-funded piece of horror magic. The Game Kitchen--group behind the game--used their stretch goals to make the game even better, through ordering new music programs and other add-ons. This is a definite example of a Kickstarter success story.

I can honestly say that I was too terrified while playing this game to even think to grab screenshots.

You play as a man named Devitt, whose friend has sent him an urgent letter. Upon visiting your friend's house, you find it empty and eerily silent. In the fashion of an old-school point-and-click adventure game, you will be navigating around the house and looking for clues regarding your friend's whereabouts, all the while unraveling the mystery of the vacant house. Picking up certain objects and interacting with them can help you progress.

The graphics are heavily pixellated, but still have a high level of detail. You can plainly see the subjects in the various pictures hanging on the game's walls, and any other little details of the like. Even if you can't immediately tell what something is, clicking on it will often bring up a description.

The game's mood is perfectly set by its original score. All music is composed by The Game Kitchen's in-house composer, Carlos Viola,

If you love something creepy and don't mind being more than a little bit unnerved, I urge you to give The Last Door a play. In the dark. With headphones on. Or surround sound.

The Sea Will Claim Everything

Recommended listening for this article. Music by Chris Christodoulou.

Not on Steam has some real gems. I left the site with a tiny wishlist for later use, but there was one that I knew I had to buy before the sale expired. Looking back on it, I wish I'd paid full price, because I'd like to contribute to this creative team. Jonas Kyratzes is the mind behind this masterful game.


The trailer for The Sea Will Claim Everything grabbed me. Something about the colourful hand-drawn graphics, the mystery that came from being unable to see the screenshots in full, the atmospheric music and, of course, all the testimonial reviews being quoted throughout told me I would have to play this game as soon as possible.

The first thing you'll likely notice is the graphical style. If the game looks like it was drawn by hand, well, that's because it was. This game has hundreds of hand-drawn screens and items, all done by the designer's wife, Verena Kyratzes. That takes a lot of hard work and dedication, and the result fits flawlessly with the game's unexpected-but-welcome melange of whimsy and depth. The graphics are not HD, not in three dimensions and not in retina display, and that makes a refreshing change.

The graphics may be two dimensional, but the world and story are anything but. You start off in the sentient house Underhome, which has undergone a recent attempt of foreclosure. You're immediately introduced to The Mysterious-Druid--not a title, but a full name--who lives in the Underhome. The Underhome is thrown completely out of whack, and all its systems are in a state of chaos. The Mysterious-Druid--you can call him The--informs you that the Underhome has been in his family for centuries and there is no reason for it to be foreclosed. It is now up to you to help heal the Underhome and find out just why someone tried to foreclose it.

In the meantime, you get sucked into an immersive, fiercely political world. There is a serious reason behind the turmoil in the Fortunate Isles which encompass the game. You must travel all through these isles to unravel the mystery and, finally, the message behind The Sea Will Claim Everything. The game doesn't fit into any traditional boxes, but if I were to call it anything, I would say it's an exploration-based puzzle game. It's not puzzle in the traditional sense, either--you have to find specific items on your travels, and in order to do that, you often have to complete a task of some kind for a character. You also can make items through a fun and amusing alchemy system.

While playing this game, you will be doing a lot of reading, and the unique interface lays it out in a way that is comprehensive. Each screen has dozens of things to click on and read about, with witty, original flavour text. My personal favourite is the recurring Bob the Spider, who seems to lead quite an incredible life. Some unique elements exist as well, such as the lever which turns the graphics on and off. This lever becomes crucial later on in the game, but I won't say why.

The music is another highlight of this game. Chris Christodoulou paints a gorgeous musical picture for this title, with calming interludes and some sweeping epics. Give the soundtrack a listen to see what I mean, or just, you know, play the game. The music fits perfectly with the game's themes and mood.

For a modest ten dollars, you get a solid 6-7 hours of gameplay. The story is beautifully crafted, and the characters are memorable and detailed. By the time the game comes to an end, you'll walk away feeling like you truly accomplished something, and you'll be sad to leave it behind.

What I love about TSWCE is that it really encourages you to take a moment and think about your life, the choices you make, and about the lives of those around you. The meaning you find waiting for you is up to you, but if you want to find it, you will. Though heavy in its subject matter, the game is balanced expertly with wit, whimsy, and just the right amount of silliness. One part of the game reminds me of a MUD, as your surroundings are, very briefly, fully described to you rather than portrayed. This only happens once and has a uniquely unsettling quality to it.

I have only one complaint about TSWCE, and it's that it isn't Mac-friendly. That is literally my only complaint. And I fully realise that not all developers have the resources to make a multi-platform game! (Hint: go buy it so that could happen some day. I'm just saying.)

In summary, this is a beautiful, meticulously crafted story. The characters are memorable and the environments are full of detail.

I have learned that Kyratzes has a number of other games available, most of which are for free, that exist in the same Land of Dreams that TSWCE is based. This likely will not be the last review of Kyratzes' games on this blog.

A quick note that as of posting this, Gone Home is currently on sale on Steam, so grab it while you can. I picked it up this morning and I can't wait to play it!

I didn't think this game would be my next post, but apparently Starbucks had other plans.

I walked into a local Starbucks today to grab something tasty to take with me. As I waited for my drink, I browsed the songs and apps of the week and saw a familiar little hedgehog staring back at me. It seemed that the app of the week was an iOS game I had purchased for my iPad months and months prior without trying it out. Obviously, the first thing I did when I went home was whip out my iPad and give it a try.

This game is stylish and cute, with simple but effective graphics making use of a minimalistic colour scheme. The music is well-crafted, with a cute undertone but a decided moodiness to it. The controls make use of the iPhone and iPad's motion sensitivity, allowing you to tilt the device to change the hedgehog's trajectory. I bought the game for $.99 earlier this year, but right now, if you're quick, you can pick it up for free at Starbucks. 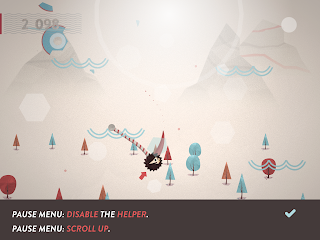 The controls take a little getting used to. My first run in the initial stage didn't see me past it and I ran out of time. I found that when I didn't worry too much about the points and collecting all the stars and circles, though, I had much more fun with the game. The lack of enemies and the wide time window allows you to relax a bit while playing it. Other articles have discussed an issue with the game's controls, which do take getting used to. I found the combination of the game's music and atmospheric graphics, plus the game's open-ended timing and lack of enemies to be oddly relaxing.

Give it a few plays and let the controls sink in a bit before making any quick decisions about it. At only $.99 a play, I think it's worth picking up. Not to mention, if you act in the next week, you can get it for free at Starbucks. It doesn't have a groundbreaking story and it won't make you cry, but it's an engaging stress reliever and Spiderman-like.

Right now, I'm hooked on Pokémon X and still trying to keep my Animal Crossing: New Leaf town afloat, so indie gaming is pretty sparse. However, I'm playing through the delightful The Sea will Claim Everything, and still gradually playing through some of the Humble games I've collected. More posts will be coming!